As a somewhat self-proclaimed financially prudent millennial currently grappling with NFTs and wondering if it’s too late to get on the crypto bandwagon after having invested in stocks and bonds, having a smart app for banking needs is a very basic ask for this writer — as with most other people of her age.

With Web3 knocking on the door, there is a need for digital banking to evolve beyond just enabling digital transactions and helping one open fixed deposits.

The current crop of digital banking apps by some of the biggest banks in India are often found to be clunky and glitchy. to say the least, and fall drastically short when it comes to UI/UX. And in a world where low code/no-code platforms help create intuitive, personalised, user-friendly apps, the mere notion that apps that are so far removed from what consumers deserve and need exist is an abomination.

Neobanking, thankfully, nails that problem right on its head, and one such neobanking app is Fi (via epiFi), created by Sujith Narayanan and Sumit Gwalani — the brains behind Google Pay.

Building on Federal Bank’s banking infrastructure, the Fi app provides neobanking services and is particularly designed to cater to working millennials. It cuts through the jargon and positions itself as a simple-to-use banking app that is user-centric. The app is available on both Google Play Store — where it has over a million downloads — and Apple App Store.

As with most neobanks, onboarding is completely digital and paperless, and one can create an account with Federal Bank via Fi in a matter of minutes, thanks to Aadhar-enabled KYC.

A definite cut above the rest

What immediately stands out when you start using Fi is the design interface. Inspired by the millennial aesthetic popularised by the likes of Instagram, the interface is modern, clean, and the flow is very smooth, which sometimes makes you wonder if you’re really using a banking app. 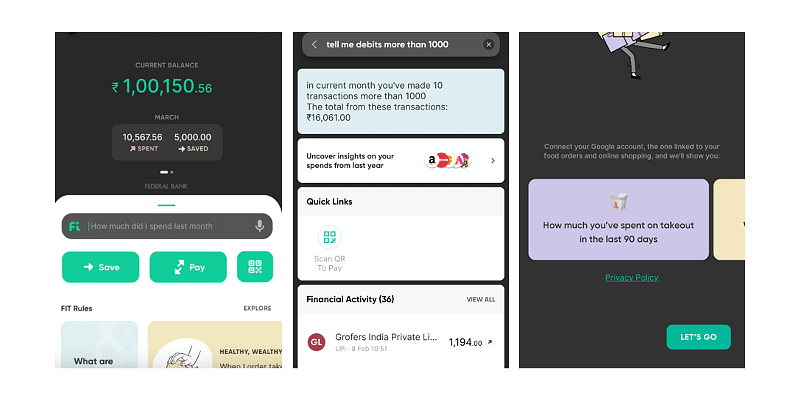 Once you’re up and running, the home screen can look a little daunting as it throws up a number of options — but everything that the app has to offer is right there on that one nifty little page.

Fi, like any other bank, lets you make online payments via UPI, offers a physical and online debit card linked to your savings account with Federal Bank, and lets you open fixed deposits. But two important features really make it stand out:

1. It lets you customise how you save your money in a fixed deposit by allowing you to set up ‘rules’ that govern your fixed deposit savings. So, every time you pay for a Swiggy or an Amazon order via Fi, or every time Virat Kohli hits a sixer, you can ask the app to deduct Rs 100 from your savings balance and put it in a fixed deposit. Essentially, even as you’re spending money, you’re saving money — which is something currently only independent apps offer.

2. Fi radically changes the way you look at your expenditure. This is a standout feature because there are very few banks that let you access and understand your savings the way Fi does — and most smart expenditure tracking apps that declutter spends the way Fi does today are third-party and not made in India.

On the app’s homepage, there’s a black search bar for queries. This feature enables you to type in any query regarding your spending — such as “how much did I spend on Swiggy in December 2020” — and the app will pull the information and present it in a very conversational manner.

You can use the search bar for basically everything — to recall your UPI ID, check how much you spent on platforms such as Amazon, Swiggy or Dunzo in any given month or week; look for transactions above or below a certain value (for example debits or credits above Rs 1,000 which can help track refunds); or how much you’ve saved in a given month, among other things.

To generate smart spending reports, Fi asks you to plug in your Gmail account where you receive digital receipts against your online purchases, and mines for data from those receipts to draw up a comprehensive expense report, unlocking insights and patterns about your spending habits.

Fi also offers you rewards in the form of Fi-coins for certain activities such as paying for e-commerce shopping five times, saving more than Rs 1,000 in a month and other similar milestones. These Fi-coins are redeemable on the app’s marketplace for gourmet coffees, discount vouchers and free subscriptions, among other things – a unique feature that makes it even more rewarding to use the app. 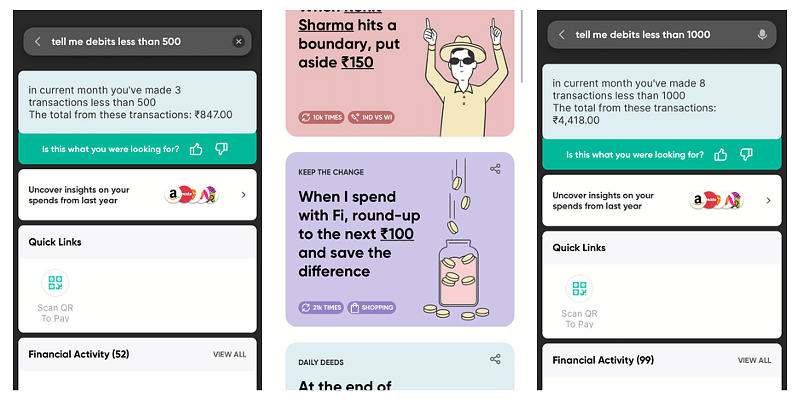 There’s no doubt that Fi beats out standard, bush-league banking apps by a mile and a half, and then some. Its spending and spare change investing features are prime examples of what a powerful banking app that infuses AI/ML and automation into its processes can do — and legacy banking apps definitely need to take a page out of its playbook.

The app interface ticks off all the boxes in terms of ease of use and user experience. The lack of glitches and random app crashes while conducting financial transactions is a welcome change.

Where the app falls short is in terms of what it lets users do. The app is still quite basic in operations — spending, tracking savings, and investing.

If Fi could incorporate more financial capabilities such as investing in stocks, mutual funds and other market instruments, and automate bill and insurance payments via integration with a Bharat BillPay while retaining the same, clean user interface, it could add a lot of value to its already superior offering. However, it must be noted that Fi is still a relatively new player in the market – its beta launched in 2019, and the app was invite-only until 2020.

All in all, Fi is a great hit if you want basic banking capabilities, with an added layer of automated savings and data-driven insights.


apps banking mdash other savings your