Slippage Tolerance > News > Cryptocurrency > Why are These 4 Cross-Chain DEXs Gaining Traction in Cosmos?

Why are These 4 Cross-Chain DEXs Gaining Traction in Cosmos?

DeFi’s growth in 2021 has been exponential, turning it into a sector now worth over $100 billion. Cosmos Network is making great strides while adding new layers to its already robust DeFi infrastructure that includes many exciting projects such as Terra, THORchain, Band Protocol, and Crypto.org.

\ One key area of growth is the addition of some of the most advanced cross-chain decentralized exchanges (DEXs) that leverage the Inter-Blockchain Communication protocol (IBC) to enable permissionless and harmonious trading across various Cosmos blockchains and beyond.

\ The DEX ecosystem within Cosmos is growing quickly. There’s now access to new and promising tokens, higher liquidity for smooth trading and price stability, permissionless token listings, opportunities for generating higher ROI by participating in liquidity pools, and a lot more. So, let’s take a look at four of the hottest protocols right now and examine why they’re gaining traction:

There’s no doubt that the integration of the Gravity DEX protocol marks the biggest DeFi milestone for Cosmos Hub to date, allowing for far greater application and utility. Now, Cosmos Hub can function as a ‘port city’ to facilitate a network of interconnected blockchains.

\ Gravity DEX also enhances the overall trading experience with seamless swaps, dramatically reduced trading fees, and more advanced trading mechanisms, such as order books and batch execution, that help mitigate the effects of front-run transactions that are commonly found on Ethereum-based DEXs (such as Uniswap) that haunt the average trader.

Access to the advanced cross-chain Gravity DEX protocol is made possible through Emeris, an intuitive dashboard which beta version launched on August 17.

\ Users can currently transfer and swap tokens and participate in liquidity pools across various Cosmos chains. Coming soon, bridges will connect the Cosmos Hub with other blockchain networks to enrich the Gravity DEX and the entire Cosmos ecosystem.

\ There’s an ongoing proposal to build a Cosmos SDK module that will provide LPs with an extra bonus in the form of farming incentives on Gravity DEX, incentivizing LPs to deposit greater liquidity and help strengthen the ecosystem of pools. This initiative is still in the works, with more information to come.

\ There’s also a budget module in the works programmed to distribute inflation and gas fees to different budget plans according to voting proposals.

\ In terms of safety and security, Gravity DEX could be considered the safest protocol within the Cosmos ecosystem, as it’s secured by over $10 billion in ATOM token liquidity to support the network. Additionally, the Gravity DEX has undergone two successful Cosmos SDK Liquidity Module Reviews from blockchain technology firms: a Security Audit by Least Authority and a Code Review by Simply VC.

\ In Q4 2021, Cosmos Hub will also be implementing a new Interchain Security feature where it, and other large Cosmos chains, can share security through lending assets in order to validate blocks on smaller chains. The addition of Interchain Security maintains hub minimalism by letting each unique feature become an independent chain certified by the same ATOM validators. Furthermore, it will help more easily deploy and run independent secure decentralized blockchains, preserving the open-source nature of the Cosmos ecosystem.

Next in the Cosmos DeFi ecosystem is Osmosis, an IBC-integrated AMM (Automated Market Maker) built using the Cosmos SDK framework. The Osmosis core business model is centered on two essential benefits of DeFi: modularity and privacy. These factors are important to DeFi because they spark creativity and innovation while offering full anonymity to protect user identities.

\ Osmosis’ underlying system is designed to be fully customizable by providing developers with maximum liberty to build and deploy their very own custom AMMs by using a “plug and play” model.

\ In terms of privacy, Osmosis uses cryptography to create shielded liquidity pools, thereby mitigating the issue of front-running and ensuring that balances and transactions remain invisible. This privacy benefits user safety and security so their online presence and portfolio remain anonymous.

\ By using the $OSMO token, holders possess the ability to vote on proposed project changes, distribute liquidity minings rewards for pools, and more. Osmosis also plans to introduce “superfluid staking” that lets $OSMO holders use the token for simultaneously staking and providing liquidity to pools, thereby maximizing the economic value between the liquidity provider (LP) and security of staking.

\ Osmosis has established a decentralized OSMO token allocation model to encourage alignment with Cosmos Hub’s community — this will be attained by distributing its entire genesis supply to Cosmos Hub accounts through its already ongoing ‘quadratic fairdrop’. A snapshot has already been taken and to earn the airdrop allocation, users need to engage in multiple on-chain activities like staking, and governance.

\ Taking inspiration from mechanisms like quadratic voting and quadratic funding, the quadratic airdrop is meant to decrease the distribution inequality in the new governance set, while still recognizing the contributions of larger stakeholders. It will reward Cosmos Hub accounts that actively participate in independently staking, while reducing the amount of OSMO tokens allocated to ATOMs stored in exchanges and whales.

Sifchain is a cross-chain IBC-enabled DEX built with the Cosmos SDK. Users can easily swap and pool between the native $ROWAN token, ERC-20, and Cosmos digital assets, all more cheaply and efficiently than using existing DEXs on Ethereum.

\ To achieve Sifchain’s mission of generating the highest possible asset transfer value between Ethereum and Cosmos, the team integrated “Peggy”, a bridge from Cosmos to Ethereum, in early 2021. Peggy uses pegged tokens so token holders on either side can access and reap the benefits of their assets on both chains, while also bundling liquidity.

\ Sifchain governance is decentralized and facilitates on-chain through $ROWAN, where users can decide on adding new pegged tokens to the ecosystem. Sifchain has implemented SifDAO, a decentralized autonomous organization (DAO)-based system, which is a community-governed organization absent of central leadership where decisions are made based on a set of rules carried out on the blockchain.

\ SifDAO operates independently of the DEX while serving as a contributor to its future development.

\ The Sifchain DEX has also implemented continuous liquidity pools (CLPs), where users need to provide $ROWAN in addition to any other Sifchain-supported asset. As a result, LPs can earn rewards and traders are able to borrow liquidity to execute margin trades. Asymmetric pooling is another one of its key features, providing users with the flexibility to deposit any amount of tokens into a liquidity pool.

Last but not least, Coinswap is a cross-chain AMM module for dapps within the Cosmos ecosystem built on IRISnet (or the IRIS Hub), an interchain service hub built on Cosmos SDK — it’s connected with the Cosmos Hub and provides liquidity for assets linked across the different Cosmos chains.

\ The Coinswap Web Application is the gateway to using the AMM, allowing users to swap tokens, deposit or withdraw liquidity from pools, and participate in yield farming — anyone can begin trading by connecting either their Keplr or WalletConnect web wallet. WalletConnect leverages IRISnet’s HTLC module to connect with Binance Chain, allowing for cross-chain transfers of assets such as BUSD and BNB on Cosmos.

\ But there’s more here than meets the eye — IRISnet will be deploying the Terse IBC (TIBC) protocol, simplifying the IBC by connecting one smart contract as the overall channel for EVM-compatible blockchains. TIBC will also support NFT (non-fungible token) cross-chain transfers from the IRIS Hub to the OpenSea platform. In essence, this protocol allows for enhanced application and greater synergy between the DEXs across the Cosmos ecosystem.

\ $IRIS is the platform’s native token, which supports and secures the underlying network. Coinswap has connected with StaFi so users can stake Cosmos-based tokens and receive rTokens (the asset’s staking derivative) as rewards. These rTokens (such as rATOM and rIRIS) can be traded on other DEXs and applications, enhancing token utility and application across the Cosmos ecosystem.

Let’s take a closer look at the main features of these DEXs and shine a light on their similarities and differences to better understand how these protocols fit under the Cosmos umbrella: 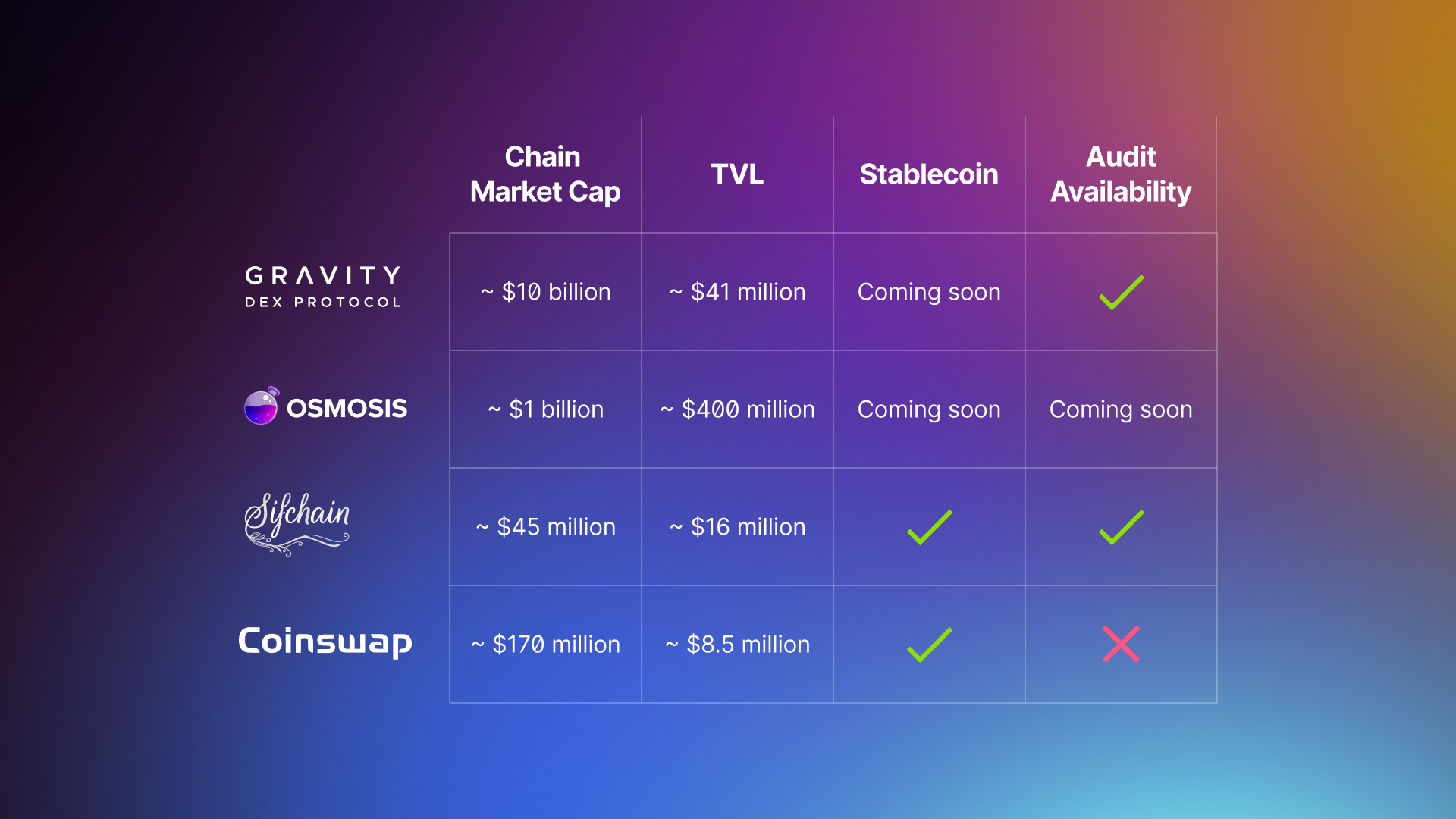 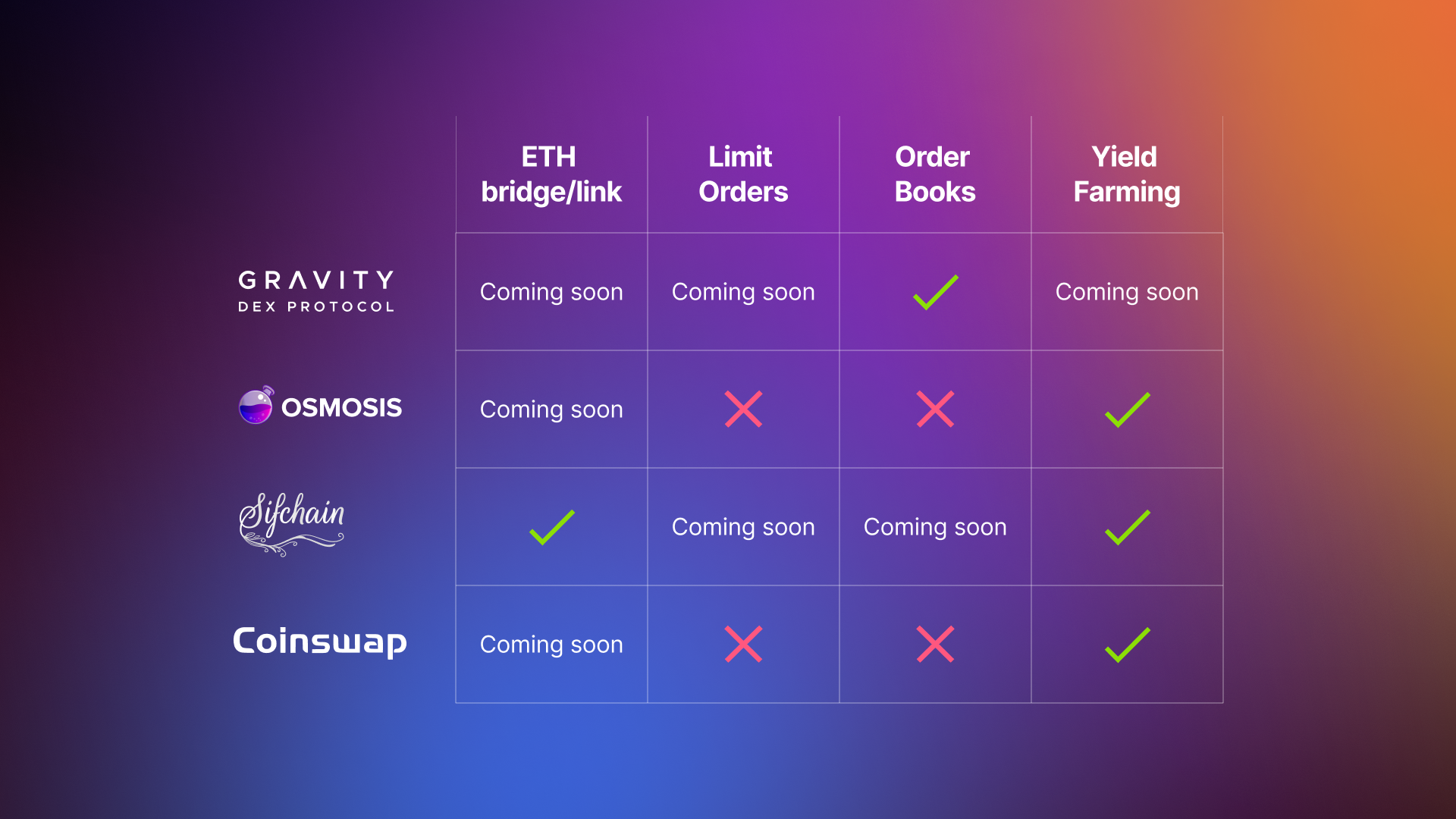 Although not all of these protocols offer stablecoin support yet, more interconnectivity is on the way. The Terra ecosystem announced its connectivity to Cosmos by Sept 29 after Columbus-5 Upgrade, meaning its stablecoins will be available for trading across all of these DEXs, providing enhanced utility to Cosmos Hub and beyond.

\ Gravity DEX, Osmosis, Sifchain, and Coinswap are just a few examples of how decentralized protocols can coexist within the Cosmos ecosystem using the IBC — the potential is limitless.

Each DEX comes equipped with its own unique set of features, so it’s recommended that users keep the following considerations in mind when making their selection:

Security/Liquidity: Total value securing the chain, total value locked on the DEX/in the pools, and verifiable safety of the code and framework for utilization Historical Track Record: History of the chain’s production, ongoing developments, and milestones hit User Interface: Design, usability, and seamlessness of the trading experience Advanced Trading and Rewards-based Mechanisms: Availability to stake, farm, and utilize innovative trading tools, such as order books and limit orders

\ Regardless of which factors users choose to prioritize, it’s important to keep in mind that the technology behind these protocols and features is still early. Everyone should conduct their own research and understand the associated risks before trading.