Slippage Tolerance > News > Altcoins > The account for Freedom Phone, an anti-big tech smartphone for conservatives, is still tweeting from an iPhone

The account for Freedom Phone, an anti-big tech smartphone for conservatives, is still tweeting from an iPhone 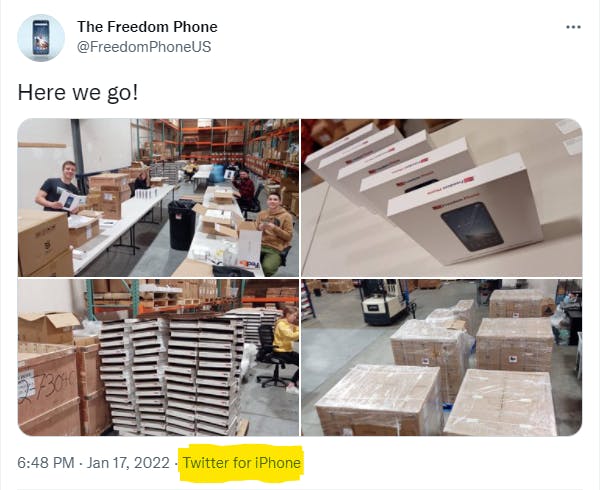 “I’m not only the Hair Club president, but I’m also a client,” is one of the most famous lines in advertising. The Freedom Phone should probably take a page from Hair Club for Men’s playbook. Because the Freedom Phone’s Twitter account is tweeting with an iPhone.

The Freedom Phone was announced last summer. Founder Erik Finman, who describes himself as “the world’s youngest bitcoin billionaire,” said he created the phone and “its uncensorable app store” to take on big tech.

“It does everything your current phone does, except censor you and spy on you.”

Finman said that it wouldn’t ban apps, such as Parler, which come preloaded on the Freedom Phone. He also blasted social media platforms for banning people like former President Donald Trump. “If they will censor a president, they will censor anyone.”

Finman stopped short of claiming that using his device would impact a platform’s ability to enforce its terms of service.

Nevertheless, conservatives were thrilled. Many rushed to preorder the phone.

The Daily Dot later reported that the $500 phone was just a rebranded Chinese phone that costs as little as $119. Security experts also expressed concern that the Chinese-made device had notoriously poor security.

This did little to tamper enthusiasm.

After many months, customers started receiving Freedom Phones this week. It’s not clear anyone’s actually using the phone, however.

This is a genius scam of maga morons so they can buy nice iPhones. Freedom phony are standard basic phones made in China running on android. All they did is change logo / package box so they can multiply price x 5. Trump will make the free guy secretary of commerce ! pic.twitter.com/hepcrFieyH

Freedom Phone isn’t its only (presumed) customer that isn’t using a Freedom Phone. Last summer, pundit Candace Owens wrote on Instagram about how “excited” she was to get rid of her iPhone.

As of Tuesday, Owens was still tweeting with an iPhone.

The post The account for Freedom Phone, an anti-big tech smartphone for conservatives, is still tweeting from an iPhone appeared first on The Daily Dot.