Samsung Galaxy S22 hands-on: What we know so far 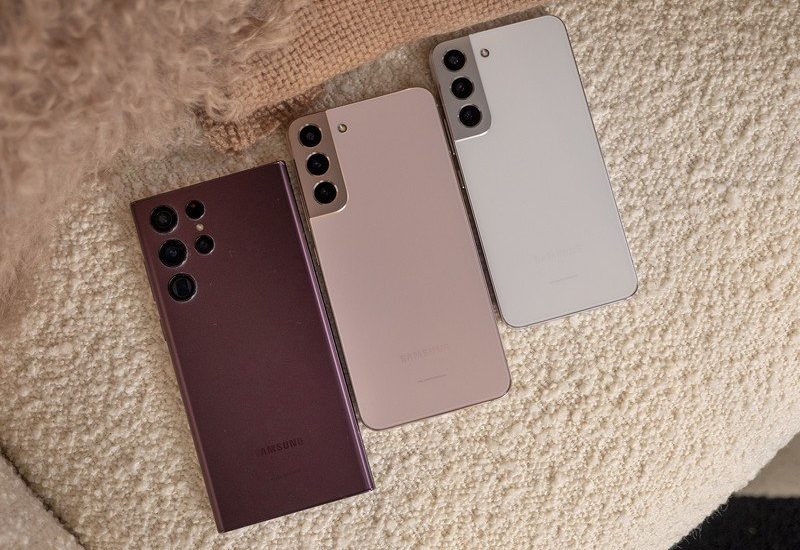 Galaxy Note fans might have had to sit out 2021 wondering if their favorite phone would ever get another sequel, but 2022 is turning out to be a happier story for those folks. That’s right, the Note has returned in glorious form for 2022, this time branded as a Galaxy S device.

Meanwhile, the less expensive S22 and S22+ are more iterative updates. The S22 and S22+ have shrunk a bit — something that smaller phone lovers will rejoice over — all without sacrificing top-quality cameras or other components that usually get downgraded in the shrinking process.

We got the chance to go hands-on with all three of Samsung’s latest and greatest and brought back the evidence that tells the tale. Here’s our Galaxy S22 hands-on. The Galaxy S22 and Galaxy S22+ are available in the same four colors: Phantom Black, Phantom White, green, and Pink Gold. You can preorder the Galaxy S22 right now. Hardly a year goes by when smartphone vendors don’t talk about their latest cameras’ quality. Once again, Samsung is talking up its latest camera experience, which has been upgraded on all three new phones.

As expected, the Galaxy S22 Ultra packs the best camera hardware of all three phones, sporting a primary 108mp sensor — an upgraded one over last year’s sensors — and three additional rear cameras. These include an ultra-wide-angle camera and two telephoto cameras, one with 3x optical zoom and another with 10x optical zoom. That should ensure that no matter how much or little you zoom in for a picture or video, the Galaxy S22 Ultra should be able to deliver the absolute clearest image of any phone.

Likewise, the smaller Galaxy S22 and the S22+ have received new 50mp main cameras in addition to their ultra-wide and telephoto sensors.

All three phones can use Samsung’s new Adaptive Pixel technology, which adds a third layer to the photo processing process.

When Adaptive Pixel is activated, photos taken with the Galaxy S22 or S22 plus will output 50mp images, while the S22 Ultra outputs a full 108mp resolution photos.

In short, when Adaptive Pixel is activated, photos taken with the Galaxy S22 or S22 plus will output as 50mp images, while the S22 Ultra outputs full 108mp resolution photos. Adaptive Pixel kicks in automatically when light levels get low and cannot be manually toggled on or off.

The phone then takes a series of 12mp to 25mp images via a photo-binning process called Nona-binning, which combines adjacent pixels to virtually create larger pixels. It then takes another full-resolution 50mp or 108mp shot to gather as much fine detail from the scene.

The power of the Exynos 2200 or Snapdragon 8 Gen 1 processor then takes all these photos — which are snapped in the blink of an eye — and stitches them together to balance out lighting and details in a way that hasn’t been done yet.

We didn’t get a chance to test the camera much at the hands-on event but will be putting these phones through their paces shortly. From the get-go, it’s pretty obvious that the Galaxy S22 Ultra is different from its cousins. Gone is the contour edge camera hump and, in its place, is a smattering of camera lenses that looks like it would fit nicely on an LG Velvet successor.

The Galaxy S22 Ultra is the lost Note 21 we never got.

The body, too, is wildly different from the other two Galaxy S22 models. While those phones have been flattened and squared up compared to their 2021 predecessors, the S22 Ultra looks incredibly similar to the Note 20 Ultra.

The top and bottom of the metal frame are completely flat, while both left and right sides are fully curved around the frame. It’s almost like Samsung took a cylinder and stretched it out until it was the proper width of a phone.

Potential Galaxy S22 Ultra buyers can also choose from two brand new colors: burgundy or forest green. Some photos might make the burgundy look more like copper or bronze, but that deep red hue of the French wine it’s named after shines through in most lighting conditions. I preferred the forest green choice. It’s simply a gorgeous color that is well complemented by the curves of the S22 Ultra. This one is actually green, too, unlike the Phantom Green that we saw on the Z Fold 3 last year.

As you would expect from a Galaxy Note device, the Galaxy S22 Ultra features an S Pen holster on the bottom, complete with an S Pen inside. This is more or less the same S Pen we got on the Note 20 Ultra, but the Wacom digitizer in the display has been upgraded.

Anyone upgrading from a previous Galaxy Note will immediately notice the difference in writing latency the first time they use the S22 Ultra. At just 2.8ms of latency, the S Pen finally feels identical to writing with a regular pen.

At just 2.8ms of latency, the S Pen finally feels identical to writing with a regular pen.

To say that’s substantially quicker than any Note device that came before it is an understatement. For example, the Galaxy Note 20 Ultra sported a 26ms response time to the S Pen, while previous generations of Note phones took 42ms.

The difference between 26ms and 2.8ms is noticeable enough, but anyone coming from an older Note will be blown away. This is more than a standard generational upgrade.

This is the penultimate traditional Samsung flagship phone in every way you can imagine. While Galaxy S22 Ultra might be curvier than last year’s S21 Ultra, the smaller Galaxy S22 and Galaxy S22+ are flatter than their 2021 counterparts.

Where previous generations could have been described as feeling like holding a smooth river stone, the Galaxy S22 and S22+ feel decidedly manmade.

This falls in line with the trajectory Samsung has been on for years, eschewing curved displays for flat ones, toning down curves on frames, and reducing angles all around the phone. Where previous generations could have been described as feeling like holding a smooth river stone, the Galaxy S22 and S22+ feel decidedly manmade.

There’s no denying the similarity this new design carries to the iPhone 13. The shiny flat frame wraps entirely around the phone, only interrupted by the occasional antenna line, port, or button. Those bezels have further slimmed up and are now completely uniform on all sides.

In my experience, it’s usually easier to hold flatter phones — especially in the Winter or if you don’t get one of the best Galaxy S22 cases — but a flatter screen makes it more challenging to use some gestures while rocking a case.

What’s decidedly not in line with normal Samsung trends is that both the S22 and S22+ are smaller than their 2021 counterparts. So if you’ve loathed the phone size growth rate over the past few years, Samsung is directly courting you with the smaller S22 models.

In fact, the smaller S22 could very well be the best new small phone we’ve seen on the Android side in some years.

Those bezels have further slimmed up and are now completely uniform on all sides. It’s pretty impressive seeing these bezels with just a small punch hole camera to interrupt the symmetry.

If you’ve loathed the phone size growth rate over the past few years, Samsung is directly courting you with the smaller S22 models.

Like the design, Samsung has flattened the color palette on both of these phones compared to 2021’s models. Gone are some of the more interesting color schemes from last year, and, in their place, Samsung has opted for more subdued tones.

Both pink and green colors are quite soft and wouldn’t look out of place on a pleasant Spring day. If these weren’t inspired by flowers, I’d be quite surprised. This year, Samsung isn’t debuting some new display tech or refresh rate paradigm. Rather, Samsung’s improvement to its displays in all three phones is most notable in bright conditions.

Samsung has extended its 45W charging tech to both the Galaxy S22+ and the S22 Ultra.

Samsung calls this VisionBooster, and it works by pumping up the darkest parts of an image while in direct sunlight or another situation where the light could wash out the display.

Considering it was a dreary, rainy day in New York, I couldn’t test this new feature but certainly plan to try it out during the review period. If nothing, it’s notable that Samsung spent time on such a feature when they already have the brightest smartphone displays on the market. Some content is just difficult to see in bright conditions, no matter what, so this new feature could come in clutch when needed.

Speaking of tech that isn’t necessary but is certainly nice in a pinch, Samsung has extended its 45W charging tech to the Galaxy S22+ and the S22 Ultra. While a charger likely won’t be included in the box, picking up a 45W charger will mean that it takes much, much less time to top off those giant batteries when the need arises. Meanwhile, the smaller Galaxy S22 is still using the same 25W charging tech Samsung has been using for a while now. That’s not as big a deal for the smaller phone since it has a smaller battery, but it still puts Samsung at a slight disadvantage compared to other OEMs pushing much higher charging speeds.

In line with that, the battery sizes have shrunk for both the S22 and S22+ when compared to the S21 and S21+. That is almost certainly down to the size changes in both phones, but it remains to be seen if the battery life will worsen or if the new chipsets are just that much more efficient.

Lastly, Samsung is shipping all three Galaxy S22 models with One UI 4.1. This is a relatively minor upgrade over the current Android 12-based One UI 4 on other Samsung phones and features Samsung’s new Digital Wallet platform, an upgraded version of Google Duo with a new live share feature, and a smattering of little tweaks and bug fixes for good measure.

But the real headline here is that Samsung has guaranteed support and updates for the next five years, including updating all three Galaxy S22 phones to Android 16 before retiring. That means if nothing changes in the next few years, the Galaxy S22 will receive one additional major update over Google’s Pixel 6.

The Galaxy S22 might not be the most interesting release in recent memory, but it certainly looks to be a solid upgrade for anyone coming from a Galaxy phone released before 2021. The return of the Note Samsung has finally decided that bigger isn’t always better, giving users an easier-to-reach display without forgetting to upgrade everything else. It’s just right for you.