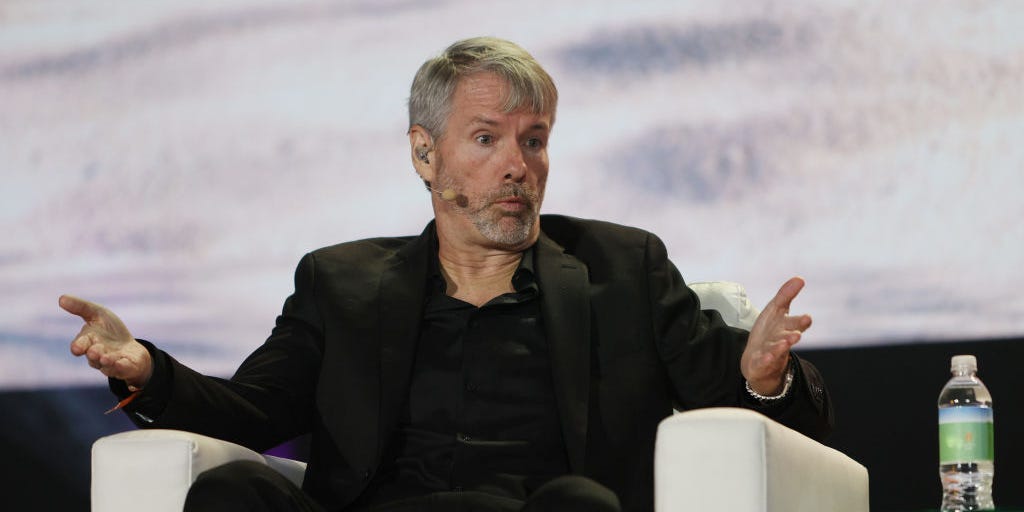 MicroStrategy CEO Michael Saylor explained why bitcoin is the best store of value in a new podcast interview. If investors won’t hold bitcoin for 10 years, they shouldn’t hold it 10 minutes, the crypto bull said. Saylor described what the mainstream application of crypto would be — if only people understood it.

MicroStrategy CEO Michael Saylor talked about why bitcoin is the best store of value in a new interview, soon after vowing to stick with buying the digital asset even as it comes under pressure.

Here are Saylor’s 10 best quotes from the interview.

2. “The inability to store your economic energy in the form of property or money over time is an economic death sentence.”

3. “Property has been that solution. The problem with property is property has a maintenance cost. Property also has a tax bill every year — say 2%, 1%, half a percent. That’s the second problem.” “The third problem is you can’t decompose property into a million little pieces, ship it all around the world and recompose the property, so property doesn’t serve as money very well. It’s hard to break off a tenth of your building and buy a car with a tenth of a building.” — property, unlike bitcoin, can’t act as money.

5. “The idea of being able to work for 30 years, and save a lot of money — why can’t you live off the money that you saved for the rest of your life? The reason is because the store of value was broken. So what happens is everybody is stampeded into risk assets, and you have to bet on Peloton or GameStop or guess.” — Referring to low returns and the meme stock craze.

6. “The problem with gold coins is that the gold coins will only be worth one-tenth as much in 100 years or in 50 years as it is today. And the other problem is I can’t easily move them around. I want to move $1 billion of gold from here to Tokyo, it takes three months and $5 million. I can’t decompose it, and recompose it.”

7. “The entire world would shift to dollars and bitcoin, if they could move them on crypto rails at the speed of light. The problem is, a lot of people can’t figure out how to do that yet. And still a lot of people in the world misunderstand what bitcoin is.” — Buying crypto isn’t easy.

8. “So the mainstream application of crypto is it’s a savings account in cyberspace for people that have neither the means, nor the wherewithal, or the inclination to run their own hedge fund.”

9. “Bitcoin is not competing with the dollar. It’s not a currency.” — Noting the definition of a currency is it can be used as a medium of exchange without a taxable event.

10. “‘Cryptocurrency’ is the worst term, because legally, it’s not a currency. ‘Crypto money’ is an intellectual term, but the problem is most people equate money with currency, and so they come down to the same cognitive traps. ‘Crypto property’ is much better.”

11. “El Salvador has got a lot of friction because they’re characterizing it as currency and not property. If they had simply said, ‘We’re going to use the dollar as a medium of exchange, and then we’re going to use bitcoin as a store of value. And bitcoin is property, and the dollar is currency,” you would have none of those sparks flying around.”

Read more: A top value investor whose firm called the 2008 housing crash explains why major indices are ‘historically overvalued’ – and shares 3 strategies for adapting to the current market conditions