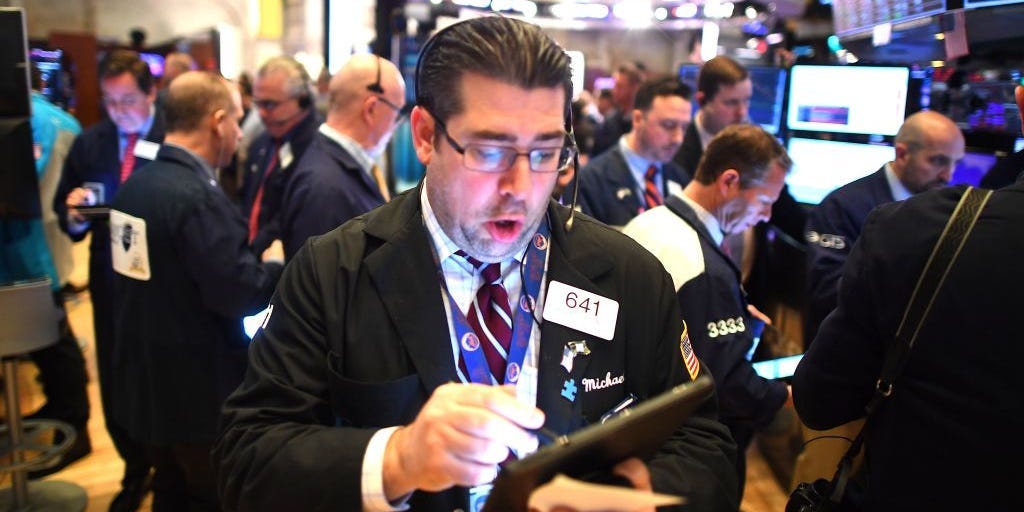 Traders work during the opening bell at the New York Stock Exchange (NYSE).

Global stocks dropped sharply Monday on fears of an imminent Russian invasion of Ukraine.
This macro-economic backdrop of higher risk and growing inflation could erode returns for both bonds and stocks.
Oil prices neared $96 a barrel, and traders are speculating crude could hit $100 any time.

Global stocks fell Monday on growing expectations of a Russian invasion of Ukraine and worries that inflation might be running far too hot, which sent safe-haven assets like gold and government bonds higher.

Multiple US officials told Politico they have intelligence that Russia could begin a physical assault on Ukraine as soon as February 16. The UK has also urged its own nationals to leave the country while commercial means are still available, citing the risk of a military incursion.

Analysts noted the current macro-economic backdrop is likely to generate lower returns for bonds and equities, greater volatility, and better opportunities from assets that offer better protection from inflation.

While investor concerns about the effects of the Omicron variant of Covid-19 have waned, volatility still remains high, given surprisingly strong readings of US inflation and now, growing geopolitical tensions in Eastern Europe.

“The twin troubles of a looming conflict and soaring prices are likely to be behind the plunge in investor confidence, in almost all global regions, with confidence falling by 6% on average,” said Susannah Streeter, markets analyst at Hargreaves Lansdown.

With January inflation coming in above expectations at 7.5%, investors are considering the number and size of rate hikes by the Fed this year. San Francisco Fed President Mary Daly suggested in an interview Sunday that being too “abrupt and aggressive” on policy could weigh on growth.

Gold rose 0.8% to $1,857 per ounce to hover around its highest for three months. The Swiss franc, also often seen as a safe haven, rose by 0.5% against the euro to 1.056 francs, set for its biggest two-day rise against the single European currency in five months.

“Gold, as well as bitcoin, are both suitable candidates, but gold prefers risk-off conditions, which is where we are now,” said Charlie Morris, founder of blockchain analytics firm ByteTree. “With so much uncertainty, the case for gold is strong – it’s fairly valued, and offers safety in a storm.”

Europen stocks fell sharply as investors continued to track developments on Russia-Ukraine tensions, and consumers prepare for more financial pain as household bills shoot up in light of high costs.

Oil prices spiked to 7-year highs, rising towards $96 a barrel. Traders are speculating oil could hit $100 as early as Monday, with a week of rising Russia-Ukraine tensions ahead.

“Energy markets are clearly on edge and if supplies are threatened there is a risk oil will shoot up even higher, adding to price pressures for companies,” Streeter said.

Read more: The recent rally is ‘nothing more than a bull trap’, says a fund manager who’s returned 200% in under 2 years. He lays out why he expects another leg down in stocks — and 4 ways he’s hedging inflation